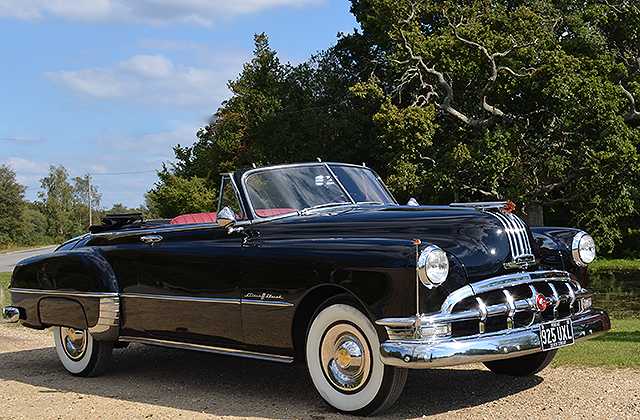 This car is based in Bournemouth.

Monty is a 1950’s Pontiac Chieftain Silver Streak Eight convertible, which was purchased from new in a Texas dealership in 1950 by an elderly lady who did not own a garage/carport. Over the years the sun-damaged the roof, interior and paint.

In 1970 it was sold to a young “hot rodder” who wanted to use the car for street racing. He quickly realised that the mechanism for the convertible roof was too heavy and slowed the car down.
The straight-eight engine was insufficient to keep up with the hot-rodded vehicles so he purchased a 1968 Pontiac GTO 6.6L V8 engine and began to transform Monty into a faster car. He passed away in the 1990s and the car was left to his family.

An English friend of the family then purchased Monty and shipped her to England where it changed hands a few times before Mick Stilton, a prolific car enthusiast, restored the car to its former glory, keeping most of the original parts and adding some hidden upgrades.
I purchased “Monty” in 2014 with the intention of showing Monty at car shows and hiring it out for weddings, TV and film productions and special events.

Monty has appeared in Alan Carrs Channel 4 homage to “Grease” the movie.
He has also appeared in a CGI film shoot for Bournemouth University photography class, promoted a diner in Poole as well as opening the Shake and Stir Festival in Southbourne, Dorset.

Monty has been hired as a bespoke wedding car since 2014 and has made over 50 happy couples’ day more special!