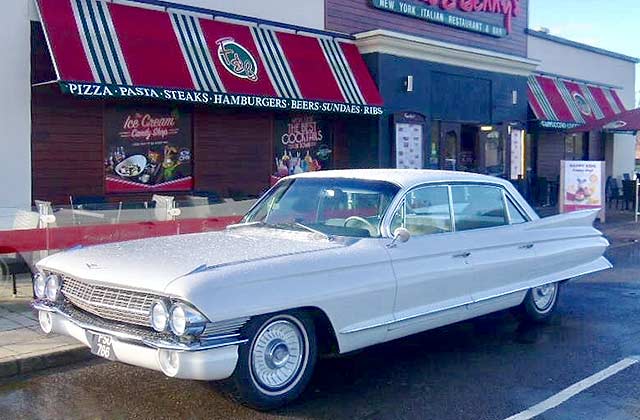 This amazing 1961 Cadillac Sedan Deville has to be seen.

This car is based in Cardiff

Cadillac is among the oldest automobile brands in the world, second in America only to Buick. Cadillac was founded from the remnants of the Henry Ford Company in 1902 and was named after Antoine de la Mothe Cadillac. The Cadillac crest is based on his coat of arms.

By the time General Motors purchased the company in 1909, Cadillac had already established itself as one of America’s premier stylish luxury carmakers causing its cars to be ranked amongst the finest in the United States and our Sedan Deville in our eyes lives up to that stylish luxury feel even after all of the decades on the road.

Our Cadillac is in superb condition and came into the UK in 1989 with 29,000 genuine miles on the clock. She was used as an advertising display feature in a night club for 15 years hence the current day preserved condition.

The 1961 Cadillac’s were also the last of the big tailfins. The tailfin era of automobile styling encompassed the 1950s and 1960s peaked between 1957 and 1961. The look is taken from a World War II fighter aircraft particularly the twin-tailed P-38 Lightning. Our white beauty is also pillarless. This means she has no centre pillar between the front and rear side windows but has extra underbody strength to support this which gives a fantastic feel of openness when cruising with all four windows down. She is the ultimate road cruiser and glides along effortlessly ensuring a very smooth ride for any passengers who have the pleasure of riding in her. In our opinion, she drives as smooth as any modern luxury car.

She will comfortably carry 5 passengers (2 in front and 3 in the back) and due to her age is exempt from seat belts. This Cadillac has a huge presence due to its size being 18-foot-long. Every Bride will want to make the grandest of all entrances and this Cadillac is the one to do it in.

Heads will turn and that spectacular entrance is guaranteed to present all passengers in style and luxury to the venue.