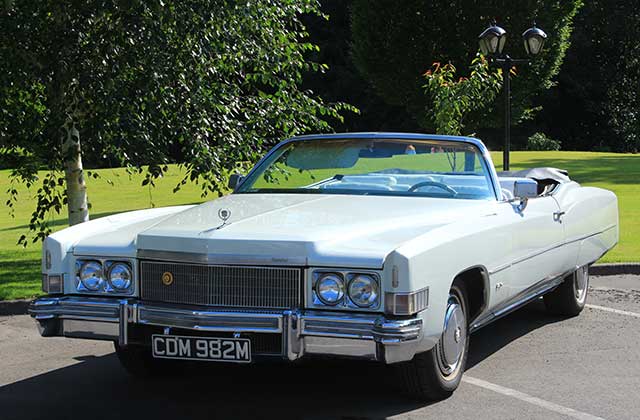 This elegant 1974 Cadillac Eldorado is a convertible

This car is based in the South of Leeds

Imagine riding around town in a 1974 Cadillac Eldorado Convertible on your special day.
It’s the stuff of dreams, though this dream can become a reality.
She was originally from Arizona, home of the Grand Canyon and is nowhere for your enjoyment.
She is finished in pearl white with a white leather interior and boasts an 8.2litre V8 engine.
She is a true classic, she is now 46 years old and I am doing my very best to keep it as original as possible.
Elvis Presley owned this very same model (who knows maybe even this very same car) and Marylin Monroe also had an Eldorado but a slightly different year.
This car will also be seen on television later this year in a very well known series with some very well known actors. The name of the series will be disclosed when it has been released for viewing.
So she really is one of a kind, and you could be one of the few people to enjoy the experience of being a star.